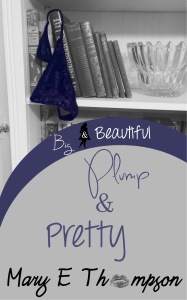 Riley is a quiet woman. She likes to read, hides behind her books. She doesn’t date much and thinks no one would be interested in the quiet, plump girl with her nose in a book.

Connor was the high school hottie. Riley knew of him, but never knew him. So when he approaches her at a wedding she’s baffled that he knows she exists let alone knows her name.

Then he disappears, only to show back up a few days later, right when she needs someone to talk to.

Not someone to kiss though.

When everything Riley’s ever wanted seems almost within her reach she starts to wonder if it’s possible, or if it was just a dream all along.

An excerpt from Plump & Pretty:

I looked down at his large hand circling my smaller wrist. I’d never felt small next to a man, but seeing his fingers wrapped all the way around my arm, the tips resting against his palm as though I was a normal sized woman and not big, made me feel small. I looked over him again, taking my time with my appraisal, enjoying the view of his long, thick legs encased in denim, the drape of his wool coat covering his hips and upper body. His other hand gripped the arm of the chair as though restraining himself.

His blue eyes begged me to reconsider, to take his words at face value then dig deeper into the heart of what he was saying. His lips were parted, poised to continue his argument if I didn’t give him the answer he wanted. Out darted his pink tongue covering the edge of his lip before vanishing again. For some reason with the appearance of his tongue my brain stalled, forgetting momentarily what we were talking about.

“Riley?” he asked, his rich deep voice pulling me from my blankness.

A glimmer lit his eyes, a spark of a challenge. He looked like the Connor Lee I remembered from high school, the one who never turned down a dare and who always got what he wanted.

He stood slowly, his hand still wrapped around my wrist. At his full height he towered over my 5’10” height by the eight inches I knew he was taller than me. Broad shoulders dwarfed mine with arms that were almost the size of my legs. Connor Lee hadn’t lost any of the definition or size he had in high school. It looked as though he’d perhaps gained even more size.

“Riley, I like you. I know we don’t know each other well, or really at all, but when I saw you, I knew I had to try to get to know you.”

“Why? I mean, really?” I stammered, not really sure what the hell was going on.

His free hand lifted and approached my cheek. I flinched, wondering what the hell he was doing. He looked into my eyes, peering close, then lifted his arm slowly, as though I was an animal that was spooked. I guess I was.

His palm touched my cheek and I brushed against it like a greedy cat wanting more. He stepped closer, the blue of his eyes darkening to a navy. The hand on my wrist glided up my arm, pausing at my shoulder before ducking under my hair and cupping the back of my neck.

Completely under his control my head tipped back, giving him full access to me. As his head lowered, my eyes drifted closed, a replay of our motions at the wedding. His lips got closer, my breath coming out in hurried puffs as I felt his breath on my face. A heavy pause filled the space, disappointment filling me as I realized he wasn’t going to kiss me like I thought.

“Riley,” he said, making my eyes open. His face was right in front of me, level with mine. His navy eyes bore straight through my body. I’ve never known a feeling of being devoured by a man’s eyes until that moment. He glanced down over me, my flesh heating with every flicker of his eyes. When they met mine again I knew I’d do anything he asked, and that one day he’d crush me.

“Riley? Can I kiss you?” he whispered, barely loud enough for me to hear.

Mary E Thompson grew up loving to read, spending many nights hiding under the covers with a flashlight to finish a book. As an adult she still stays up too late, but doesn’t need a flashlight anymore thanks to her ereader.

When Mary’s not reading she’s playing with her two kids or living out her real life romance with her hubby. She has a weakness for chocolate, Buffalo sports teams, and wine, lots of wine.

Favorite type of pet – Dog, but I don’t have time for one.

Favorite place to visit – The book store, any one.

Significant other – I haven’t had anyone significant in my life for a while.

Most important goal – To show everyone the joy of reading.

Worst fear or nightmare – That my friends won’t find happiness.

Secret desire or fantasy – To own READ.

What would you do if you won the lottery? Buy READ, in a heartbeat.

From Mari: I’d like to send out a special thanks to Tina Gayle for inviting me to participate in her annual Egg-cerpt Exchange, which goes until March 31. I have a new author lined up for Thursday Tea & Co. every week during the Exchange. So be sure to check back next week!

This entry was posted in Softcover Sunday. Bookmark the permalink.