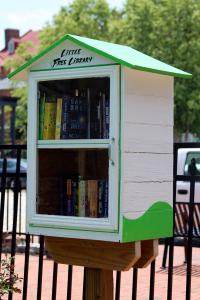 I have a wicked sense of humor and the mind of a skeptic, so much of the material I read on the internet is more likely to make me laugh than sit up and take notice. But today I’d like to do a serious, reverential Manic Monday.

I’ve been listening to the Audible version of Outlander, which was written in the 1990s. Like poodle hair and Jane Fonda workouts, the romance genre is not without fashion sense.

As I listen to Outlander, I am reminded of other books of that era that I enjoyed, but may no longer be in fashion. For one, today’s romance must be quick off the blocks. Inciting incident on page one, hero/heroine meet by page three, keep backstory to tidy tidbits thrown in as absolutely necessary, crisis at the half-way point, etc. The romance story as journey exists no more. The virginal, somewhat submissive heroine is an outrage. The alpha hero unmanned by innocence is laughable. But at one time, these theme enjoyed much success and popularity.

One of my favorite authors of the period was LaVyrle Spencer. The first book I read of hers was “The Hellion,” written in 1984. This was actually the first beta hero I ever read (she was a pioneer with this sort of hero), and I was hooked. My favorite was “The Fulfillment,” which she wrote to honor her grandmother who grew up on a Minnesota farm. The romance is wonderful and a little spicy, but the detail of life on the prairie is amazing. The best beta hero I ever met was Gabriel Farley from That Camden Summer. I loved him.

Rosemary Rogers was also popular in the “old days.” Modern readers might not care for the frequent ravaging of her heroines. One of my favorites was “The Wildest Heart” in which an English lady travels to New Mexico. She is ravaged, but also falls in love with a man who is half-hispanic, half-Irish … a first. The love story at the center is wonderful, although the book does tend to go on a little long. That wasn’t unusual for the time.

No longer in print, but representative of the time was “Savage Sands” by C. Nicholson in which a woman is kidnapped and finds herself ensconced in a harem where she proceeds to tame the sultan (sort of).

And who can leave Johanna Lindsey out of the mix? I don’t recall the book, but one that sticks in my head opens with the hero tied down, and the heroine essentially raping him (she wants to get pregnant). Again, these things worked best in 20th century romance.

Anyway, if you have some old time favorites, put them into the comments. I’d love to know what you enjoyed back in the “good old days.”

This entry was posted in Manic Monday. Bookmark the permalink.

1 Response to Manic Monday – Romance in the 20th Century